Back to all all Rungh Readings

The Rungh Readings at the Vancouver Art Book Fair were held on October 19 and 20, 2019 on the front courtyard of the Emily Carr University of Art + Design. It was a wet and stormy weekend, as evidenced by some of the shivering artists and the rain cascading in front of the reading tent. The eight featured artist reactivated content from Rungh’s various 1990s print issues along with their own work and their reflections on the importance of archives, such as the one which Rungh is creating. Thank you to Jessica Johns, Sadhu Binning, Phinder Dulai, Patrick Pouponneau, Isabella Wang, Sunera Thobani, Shazia Hafiz Ramji, and Carolyn Nakagawa. Thank you, also, to the Vancouver Art Book Fair, the production crew and to our volunteers. 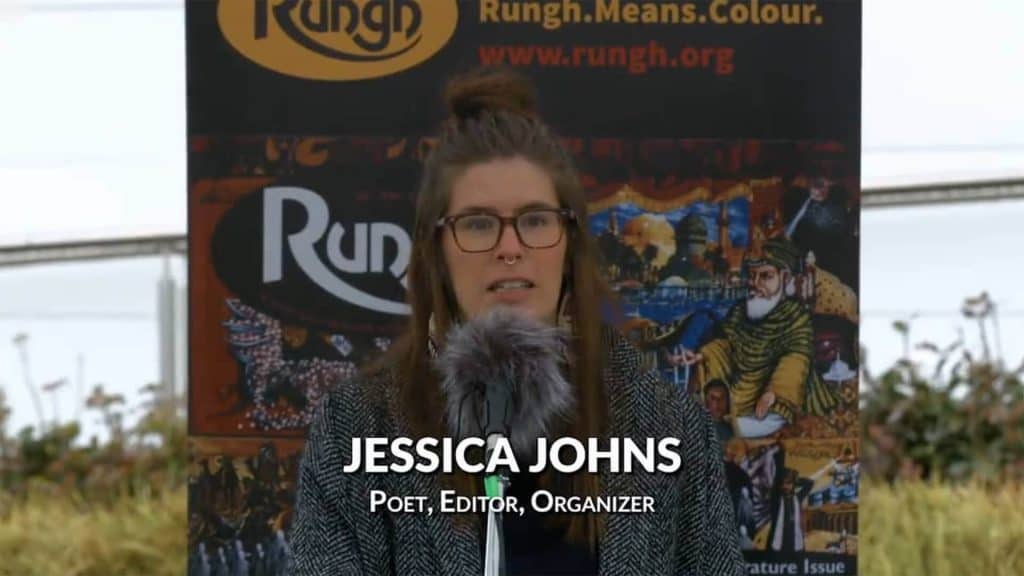 Jessica Johns starts her archive activation reading by noting that "Rungh has been doing things for decades that the most progressive magazines are doing now and, they have always been doing it". She reads from the Temptation Issue (Volume 4, Number 3, 1999) and activates a poem by Zara Suleman, The Curve. The Temptation Issue was one of the two issues which was produced and edited by a new collective (along with the Journeys Issue, Volume 4, Number 4, 1999) after the original co-founders left Rungh in 1998. She also reads from her chapbook, "How not to spill", and newer works, "How to break a prairie" and "Stubborn Blood".
Watch Video 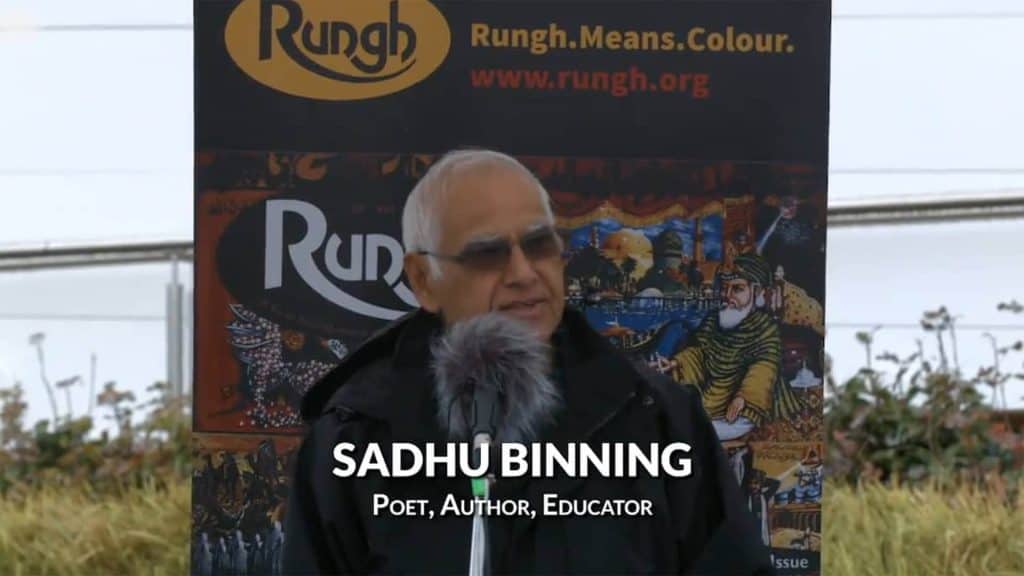 Poet and educator Sadhu Binning has been recognized for his significant contributions to Punjabi language and culture with an Honorary Doctorate from the University of British Columbia in 2019. A long time Rungh supporter and contributor, for his archive activation, he reads an article from Volume 3, Number 4, The South Asian Publications special issue, "from Watano Dur to Ankur". This article traces the partial journey of Punjabi community based magazines in British Columbia from the 1970's to the 1990's. He also activates his own group of Home Poems from Volume 3, Number 4 and reads newer works related to atheism.
Watch Video

Phinder Dulai activates his own poem, A letter to the Maru, 1914, dated 1994 a piece from the Antiracism Issue, Volume 4, Number 1&2, which was Guest Edited by Ashok Mathur and Sourayan Mookerjea. He also reads from his poetry collection dream/arteries as well as new works.
Watch Video

For his Rungh archive activation, poet/activist Patrick Pouponneau chooses to read from Volume 3, Number 1, The Food Issue, which was Guest Edited by Yasmin Ladha and included original cover art work by Iranian-American artist Shirin Neshat. He memorably performs Aritha van Herk's poem Dal Away Dutch and his own poetry that references his mother's kitchen.
Watch Video 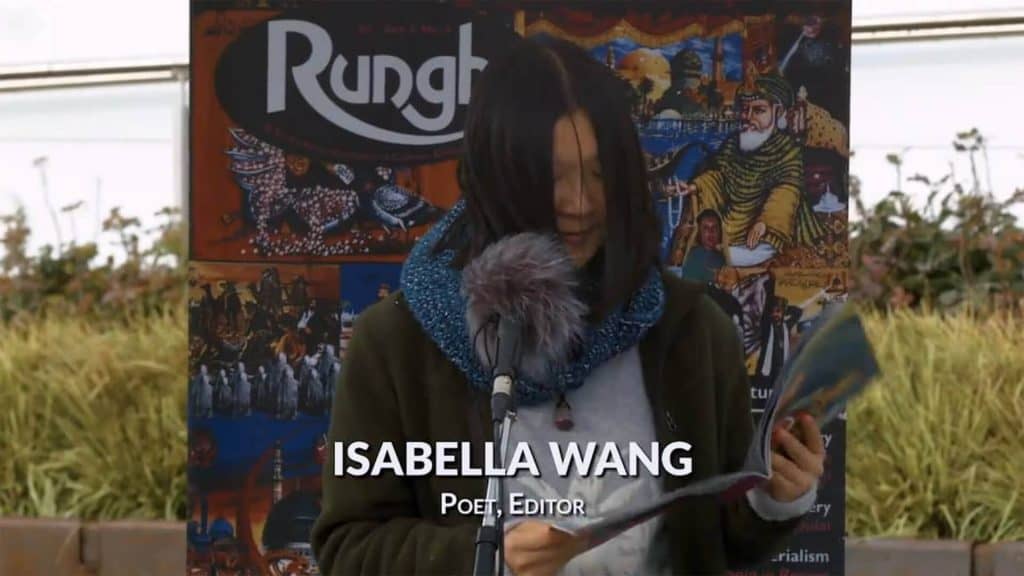 In midst of Vancouver rain showers, poet Isabella Wang, chooses to activate a poem by Sujata Bhatt, It has not rained for months, from Bhatt’s poetry collection, The Stinking Rose (1995). Bhatt’s poetry was published in the Artist Run Centre of the Food Issue (Volume 3, Number 1), Guest Edited by Yasmin Ladha. The Artist Run Centre was both a reference to, and a play upon, the idea of “artist run centres” which were/are a group of “parallel” “alternative” artist run art galleries/spaces formed across Canada in the 1970’s and which still exist. In its printed version, Rungh provided the four centre pages of each print issue to an artist to do with as they wished – the artist was given the run of the centre pages. Wang reads from her debut poetry chapbook, On Forgetting a Language (2019), and new work which is related to the form of the ghazal and Phyllis Webb.
Watch Video

Sunera Thobani's work appeared in Rungh's first issue (Volume 1, Number 1&2) and, as she points out in her powerful and historically contextualized reading, she is a 'long term supporter' of Rungh. She notes the importance of archives, such as those of Rungh, which fight back against "being written out of history". "The archives become crucial" in telling a "different story", she notes. Stories of cross cultural/community alliances and solidarities need to be saved. She activates her own writing in Rungh, which was part of a Desh Pardesh conference workshop in 1991 entitled "…There is a war on women" by referring to it and then links issues in 1991 to current struggles related to the "war on terror" by noting that "Islam as a religion has now been racialized". She reads from the essay collection, At The Limits of Justice (2014), and her essay "Fighting Terror: Race, Sex and the Monstrosity of Islam”. The activated Rungh article was part of an a conference review article written by Zara Suleman.
Watch Video 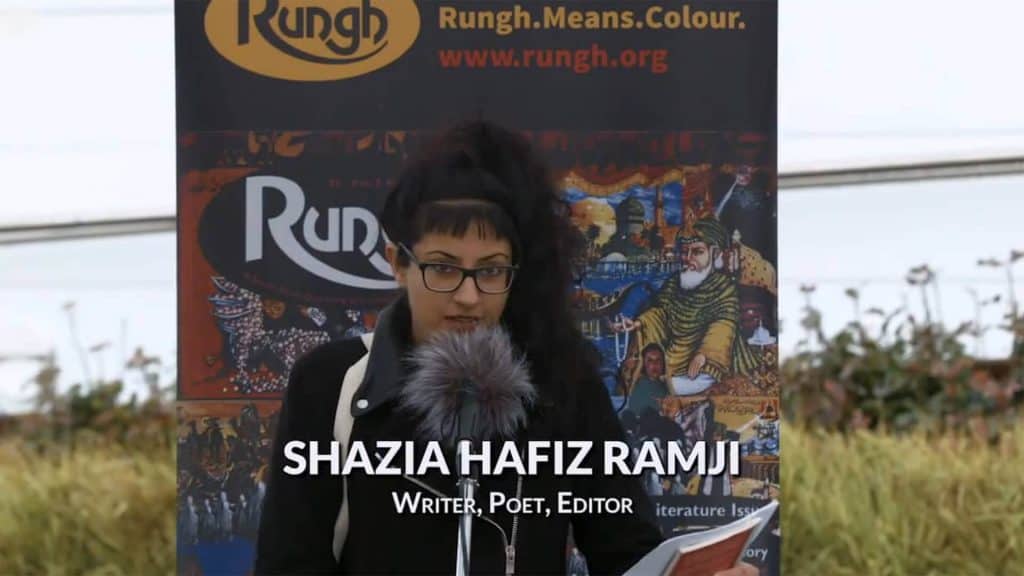 In her reading, poet Shazia Hafiz Ramji activated the final editorial in Volume 3, Number 4 (1997) written by Rungh’s co-founders Zool Suleman and Sherazad Jamal. Ramji reflects on the difficulties which arts periodicals, like Rungh, have to deal with to survive. Ramji then continues by reading her own poem, Leopard Dream Symbol, which she dedicates to her parents.
Watch Video

Poet Carolyn Nakagawa introduces her activation by refencing her own archival research into the New Canadian Japanese-Canadian newspaper from the 1930s-1940s, which is also on the same Simon Fraser University site as Rungh's archive print issues. She chooses to read Sadhu Binning's poem River Relations from Rungh, Volume 2, Number 1&2, as her first reactivation choice, and then reads her own poems, Inheritance and Homeland. She then follow by activating poet S. Ramnath's poem, Call and Response Los Angeles, April 1992, from Rungh Volume 4, Number 1&2, the Antiracism Issue, Guest Edited by Ashok Mathur and Sourayan Mookerjea. For Nakagawa, Ramnath's poem reminded her of The Second Coming by William Butler Yeats. Nakagawa concludes by reading some more of her "most apocalyptic" poems and other works.
Watch Video 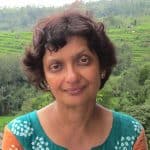 Sujata Bhatt is a poet and translator.
More

Sadhu Binning is a bilingual author a central figure in the Punjabi arts community. He has published more than fifteen books of poetry, fiction, plays, translations and research.
More 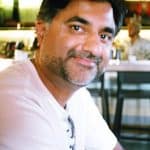 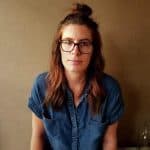 Jessica Johns is the poetry editor for PRISM international, is the Outreach and Education Coordinator for Room Magazine, and is a co-organizer of the Indigenous Brilliance reading series in Vancouver.
More

Carolyn Nakagawa is a poet, playwright, and cultural organizer. She holds a degree in English Literature and Asian Canadian and Asian Migration Studies from UBC.
More

Patrick Pouponneau is a writer, poet, activist, and musician based in Vancouver.
More

Shazia Hafiz Ramji is a writer, poet and editor.
More

S. Ramnath is a poet.
More

Sherazad Jamal is one of the two co-founders of Rungh Magazine. Together, she and Zool Suleman produced the magazine from 1991 to 1997. Her contribution includes co-designing the Rungh look and feel with her design collaborative design team, editing, publishing, administration and distribution of Rungh Magazine.
More

Zara Suleman currently works as a family law and fertility lawyer in her own solo firm. She is also a certified family law mediator and collaborative law practitioner. Zara Suleman has a Bachelor of Arts in Communications and Women’s Studies, a Law degree and a Master of Laws.
More

Sunera Thobani is a professor, activist and writer with a focus on anti-racist, feminist and anti-war movements.
More 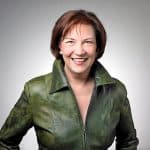 Aritha van Herk is a cultural commentator as well as an award-winning Canadian novelist whose work has been acclaimed throughout North America and Europe.
More

Isabella Wang is a poet and editor.
More