By Madiha Sikander and Rajarshi Sengupta 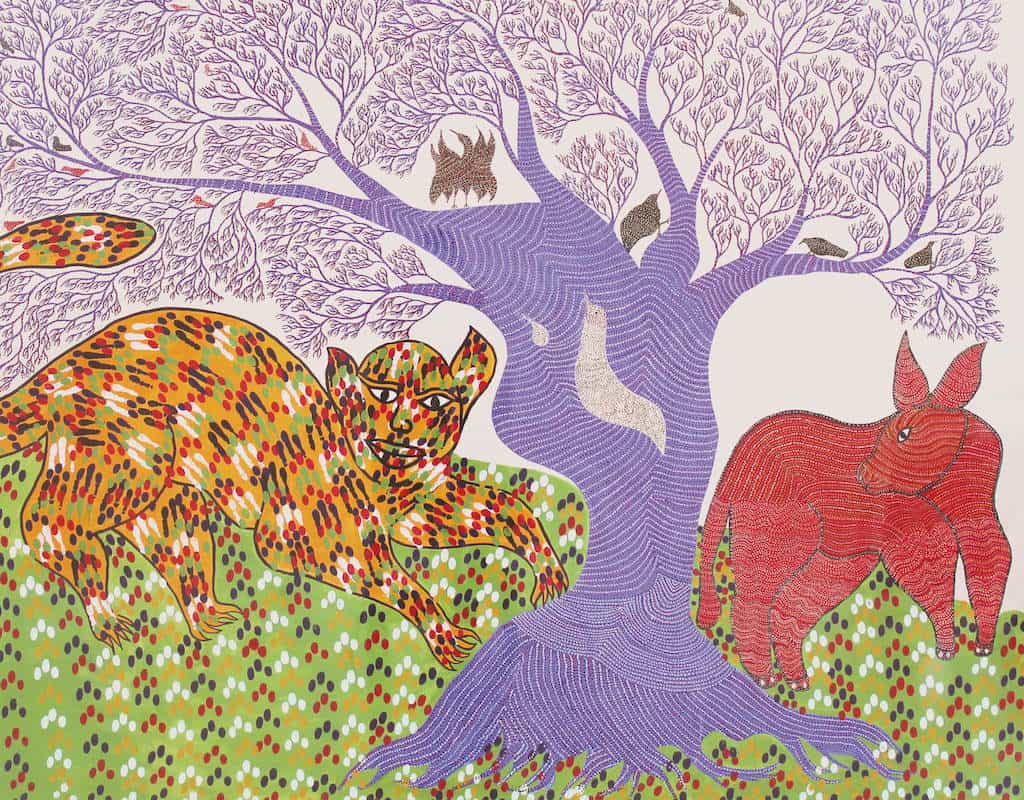 In between the large bright acrylic canvases of Manisha Jha and Mayank Shyam, Channo Devi’s natural dye painting on a cowdung-treated paper evokes the sense of a different time (Image 1). The explanatory text accompanying the images in the gallery, however, suggested otherwise.

Image 1: Overview of the works by Manisha Jha, Mayank Shyam, and Channo Devi, Installation image of Many Visions, Many Versions: Art from Indigenous Communities in India at Surrey Art Gallery, 2018. Photo courtesy of Surrey Art Gallery and SITE Photography.

All three of these works are contemporaneous to one another. The brightness of industrial acrylic is set in a conversation with natural dyes. The difference in material and technique of these works is telling and signals the shifting socio-cultural circumstances that shaped these works and the practices and approaches of the artists. This diversity is important to note as the co-existence of different artistic materials, evinces how the accumulation of time and textural treatments is a pivotal character of the visual culture operating outside the dominant in Indian art.

A glimpse of this simultaneity of visual practice by four communities in India—the Gond, Mithila, Patua, and Warli—is presented in the exhibition Many Visions, Many Versions: Art from Indigenous Communities in India, at the Surrey Art Gallery, Surrey, British Columbia, from January 20 to March 25, 2018.

The Surrey Art Gallery is the only Canadian venue for this traveling exhibition. The curatorial objective of the show, according to guest curators Aurogeeta Das and David Szanton, was not to portray these four communities distinctively but to display the works produced by the artisans from these communities under four categories; Myth and Cosmology, Nature—Real and Imagined, Village Life, and Contemporary Explorations.1 What do these categories mean in a "global village" where cultural practices can no longer be seen as incubated or insular?

The plurality and contemporaneity of these indigenous visual practices remain a predominant theme of this exhibition, a concern that is further evinced by the term “many” in the title of the exhibition. The term "many" appears to be a key concept in this project that eludes the distinctiveness of these four communities and brings them under the umbrella of "indigenous." With this is mind, our reflections on this exhibition are directed towards unpacking the complexities of the qualifier "indigenous"2 and assessing the curatorial tools and objectives for displaying indigeneity in a gallery space.

The term "indigenous" was selected by Das and Szanton to move away from the categories of "folk" and "tribe" in the Indian context, which are heavily used in the colonial nomenclature. Further, these categories were validated in the scholarship and market around the works produced by these communities. The opposite and perhaps an equally damaging framing device on this issue has been the anonymity of the rural population, prominently figured in Stella Kramrisch's 1968 project Unknown India: Ritual Art in Tribe and Village.3

The idea of "indigenous" is highly contested in the Indian context since the entire population of the country at the time of independence from British rule and their successors were considered indigenous.4 This term fails to acknowledge the historical specificities and socio-cultural surroundings of underrepresented communities.

The collapsing of these specificities leads to the danger of erasing these histories. In other words, it directs us back to the problem of anonymity. The perception of indigeneity as an all-encompassing category is demonstrated in the exhibition display. A wall under the subtheme of Village Life displays the works of Balu Jivya Mashe, Gopal Saha, and Anwar Chitrakar (Image 2). These three artists practice under the Warli, Mithila, and Patua visual paradigms.

The miniature stippled figures against a vast landscape by Mashe speak of the land-human relationship quite distinctively from Chitrakar's rendition. Chitrakar's Untitled (2012) image has a narrative scene at the centre framed by four panels with human figures. The two vertical frames show nearly mirroring images of two male musicians; the horizontal ones display a series of women dancers on a smaller scale than the male musicians. The prominent framing with repeated human motifs and a narrative panel at the centre may remind viewers of the terracotta plaques covering temple walls of central and southern Bengal.

The herd of cows and the palanquin bearers in Saha’s image present solid and yet somewhat malleable body structures suspended against a stark red background (Image 3). The Warli and Mithila painters adorned the walls of their residential and other spaces of habitation with paintings. The traces of wall paintings are observed in the figure-ground relationship of these works.

On the other hand, pata or the Bengali scroll paintings were painted on paper. The painting by Chitrakar breaks away from the scroll format but also distances itself from the rectangular framing of Kalighat paintings, a painting practice by the urban pata painters in 19th century Calcutta. The specificities of land-human or figure-ground relationships addressed in each of these works need to be exemplified and not collapsed under a general denominator.

The idea of "indigenous" connotes an intrinsic relationship with the land. By intrinsic relationship, we do not suggest an unchanged close proximity between land and communities; rather, we indicate a direct or indirect contact between community and land which transforms one’s physical and intellectual abilities. The four categories of the curatorial framework presented in this exhibition play on the land-community relationship.

The first three categories, Myth and Cosmology, Nature—Real and Imagined, and Village Life, establish the rootedness of these communities outside the reach of "contemporary."

The fourth category, Contemporary Explorations, is displayed in a room adjacent to the main gallery hall accessed through an open doorway. The doorway remains the only opening into an otherwise compact gallery space. This curatorial device claims a marked boundary between the land of the source communities and the contemporary. The captions note that majority of the participants of this show are city dwellers.

The works under the first three categories are executed by the artists who are "indigenous" and also urban. Bhuri Bai's large-scale acrylic painting of a jungle displayed under Village Life shows a flying airplane alongside a group of birds; Bai also depicts a public bus traveling on the uneven winding roads (Image 4). The representation of space in Bai's work does not establish "village" as a distinct idea from ongoing social and technological changes.

The value that the term indigenous suggests for scholars, curators, collectors and institutions may not be ones that these artists associate with which are both complex and simple at the same time.

Gopal Saha's painting, Selling Paintings to a European Tourist, also exhibited under Village Life, shows Saha sitting on a charpai (a woven bed used in the Indian subcontinent) while opposite to him the collector is seated on a chair along with another guide against a bright, dense background of foliage (Image 5). Compositionally, the collector is situated in the center of the work, but visually the use of ultramarine and yellow for the work of art being exchanged perceptively shifts the focal point of the work. There is a play of values in the work that hints at the astute awareness of the artist far beyond the parameters of village.

Survival and sustainability become convoluted when intermingled with visibility and further obscures what it means to be indigenous and on display. Perhaps what emerged as a prospective framing device for the show was the contemporaneity of these works. All the works featured in this exhibition are produced after the 1960s. These works, through their themes, representational language, and choice of material, speak of the simultaneity of community and individual experiences in post-independence India. Instead of seeking the unchanged within these community expressions, one needs to allow the works to speak.5 The stories these works convey, are different from the ones of the scholars.

For instance, Wendy Doniger's essay in the exhibition catalogue presents a Sanskritized framework to access the myths and oral narratives of these communities.6 The Sanskrit framework works in a similar way to the qualifier "indigenous," which glosses over the specificities of these artists who may or may not identify with the authoritative Sanskrit mythical tales. Again, that signals us to be attentive to the works—to see them before we start framing them under categories; to listen to them before we seek to establish a thread of connection between them.

An illustrative example is Rani Jha’s depiction of female feticide in The Abortion Clinic (Image 6). The Nagini or snake and the female doctor appear as the central figures, set against a deep red background. For Wendy Doniger, "The snake, which has played such an important part in mythologies of both life and death, is now perfectly cast in new symbolism of evil…"7 Doniger's version seems to undermine the complexity of Jha's image by presenting it as a good and evil binary. The artist complicates the snake by overlaying the female doctor, who is depicted wearing a white coat, beneath which her attire is that of the other women. She is one of them, and there are many layers to this predicament. It is not a reciprocal embodiment we see here; the snake embodies the doctor and dominates as it encircles the five little girls previously aborted and its tail drifts over a recoiling woman. The doctor holds the scissor up, which intersects the tongue of the snake, it's sensor for prey. Her gesture indicates she has a choice and delineates an organization of various states of women. The work touches on issues of womanhood and it is charged in many nuanced ways that intermingle ideas of womanhood from the past in the form of a narrative.

Between version and vision underlies the act of inference. To infer comes from the Latin word inferre—to bring in. It is suggestive of a participation on both the artistic and interpretive end which holds within it the constant possibility of divergence in which we, as artist and art historian, are also complicit as we bring in through our writing our perspectives which are subject to our contexts.

Rajarshi Sengupta is a practitioner and a PhD candidate in art history at the Dept. of Art History, Visual Arts, and Theory, University of British Columbia, Vancouver. His work focuses on artisanal histories and practice-theory interface.
More

Madiha Sikander graduated from the National College of Arts in Lahore, Pakistan, specializing in miniature painting. She works around issues of historical erasure and memory.