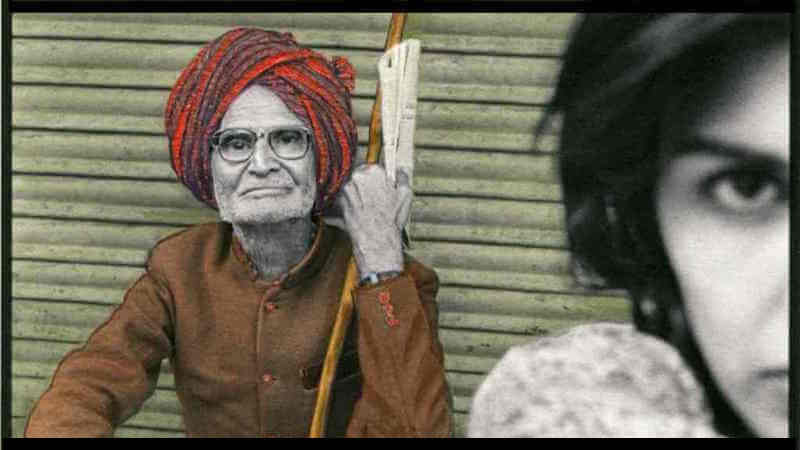 When you browse through the Kamloops Art Gallery’s past exhibitions on its website, South Asian experiences and creativities have been nearly invisible until now. This despite the fact that South Asians have been settling in British Columbia since the early 1900s and Kamloops’ South Asian community has grown significantly since the 1970s. The community forms the largest visible minority in Canada, and in B.C., the only province to have elected a South Asian Premier - Ujjal Dosanjh, they are the second largest minority. With this in mind, the true achievement of the exhibition Re Present: Photography from South Asia then comes into clearer focus. The exhibition’s very existence in the B.C. interior boldly asserts that South Asian experiences deserve to be more fully explored in our publicly funded institutions, whether they be in Vancouver or Kamloops.

The 24 historical photographs in the exhibition are all drawn from Canadian collections like the Canadian Centre for Architecture, the Royal Ontario Museum and the National Gallery of Art of Canada, highlighting the perhaps under-appreciated depth of Canadian collections. Visitors are treated to the works of important pioneering Indian photographers like Raja Deen Dayal (d. 1905) and D. Nusserwanji, and Ghasiram Haradev Sharma (d.1930), who are included among more famous British colonial peers like Felice Beato (d. 1909) and Samuel Bourne (d. 1912).

Not included are works by early photographers like Shivashankar Narayan and Darogha Ubbas Alli and later ones like Sam Tata, which is surprising since they can be found in the same collections used for the exhibition and would have greatly enriched it. The historical photographs’ subject matter ranges across portraiture, landscapes and architecture. Especially delightful are the painted photographs on display such as Portrait of Devotee Worshipping Sri Nathji by the Bharat Art Studio, which has a strikingly contemporary feel despite being made over 100 years ago (fig. 2). 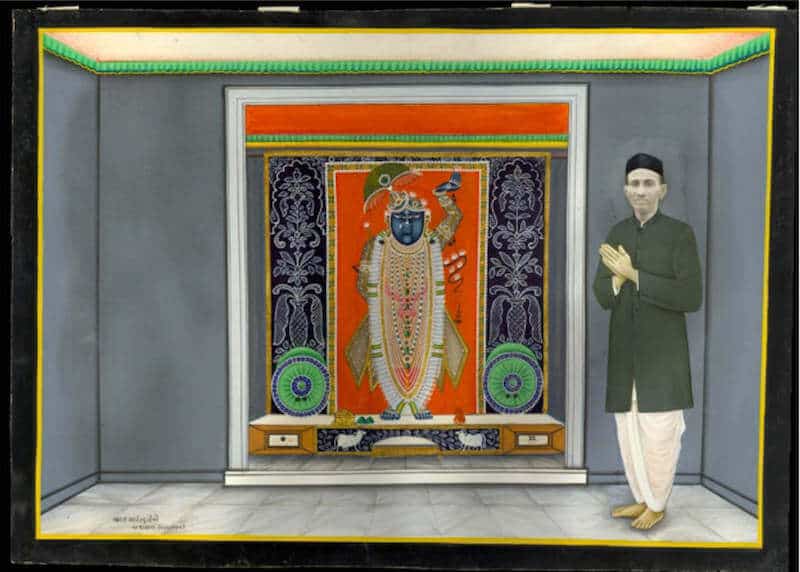 The 29 contemporary works featured in the exhibition include mostly digital prints, borrowed from the sepiaEYE gallery in New York, Exhibition 320 gallery in New Delhi and to a lesser degree the Art Gallery of Ontario. Most are fusions of contemporary and historical images, but cerebral video works are also included as well. The transnational artists are identified as Indian, Indian-Canadian, British-Indian and Canadian, but overall there are surprisingly few artists with a Canadian or British Columbian affiliation, and the Toronto-based South Asian Visual Arts Centre (SAVAC) was not involved as might be expected given their long history. That said, the selection of contemporary works does not disappoint. Particularly striking is Pamela Singh's Treasure Map 008, a black and white photograph which features an elderly turban-wearing man with glasses squatting and staring unflinchingly at the viewer, his clothes delicately painted with tints of colour but his skin is left untouched (fig. 3).

The image was taken in the mid-1990s, while the colouration is more recent. It visually marks a moment of retrospection, a coloured memory of sorts. In the foreground, half of Singh's face and body - rendered only in black and white like the man’s skin - also stares unsettlingly at the viewer. The pieces by Bharat Art Studio and Singh share a similar aesthetic across time. They are both highly deliberate exercises in self-portrayal, but they serve starkly different ends too. The former uses photography to convey Hindu devotion and piety while the latter dwells more on the act of photography itself and practices of looking. Through contrasts like these we see how our relationship to photography has both remained similar yet shifted over time.

Another compelling contemporary work in the exhibition is Annu Palakunnathu Matthew's An Indian from India (fig. 4).

The series of five diptychs juxtapose photographs of North American Indigenous people taken by famous ethnographic photographers like Edward Curtis (d. 1952) with self-portraits of the artist dressed in traditional South Asian attire. Just as Curtis made First Nations people perform their indigeneity, the artist performs her South Asianness drawing attention to the contrivance. The work cleverly shows how indigenous peoples of Canada and South Asians shave a shared history of being rendered as ethnographic objects, curiosities and fictive imaginations in Anglo-Euro colonial photography and film.

A curatorial essay on the exhibition authored by Fast is available on the gallery's website and is well worth reading, especially for those new to the topics raised. It helpfully provides historical and theoretical context, reminding us that photography was a globally dispersed endeavour that included South Asia from the outset; it was not an exclusively European or North American phenomenon. The essay does not shy away from acknowledging British Indian colonial uses of the medium to surveil and to police, but moves on to highlight the interests of early South Asian photographers as well. With the contemporary works, Fast focuses more on the individual artists than the larger social context and sees a common interest in the simultaneously "factual yet fictive" (p. 14) nature of photographic media.

Regrettably, the essay stops short of reflecting more fully on the transnational dimensions of the works, on what is revealed by bringing these particular contemporary and historical works together, and on the particularities of photography in the South Asian context and imaginary. For instance, figures from Hindu scriptures - Hanuman, Ganesha, Saraswati, Shiva, Sri Nathji, Ravanna - permeate both historical and contemporary works, but this is left unaddressed as are the similarities and differences between the gazes and purposes present in these works, which range across the colonial, the devotional, the touristic and the artistic.

What’s missing from the exhibition as a whole is a stronger sense of a local connection to the distinctive blend of the South Asian communities of Kamloops, B.C. and Canada. If "photographic imagery is deeply connected to our sense of identity and community" (p. 3) as Fast writes in her curatorial essay what of the local South Asian experience in Kamloops and B.C. and in particular Sikh communities? Given that Sikhs form the largest proportion of Canadians of South Asian heritage why do they have little presence in the exhibition? It would have been interesting to include recent images of the Sikh motorcycle club, Vaisakhi celebrations or even local wedding photography. In the collections of the Canadian Centre for Architecture (CCA) which the exhibition draws upon, historical photographs like Felipe Beato’s portraits of Sikh soldiers in India can also be found and would have helped round out the exhibition.

But these are the quibbles of one thirsting for more, and they do not overshadow the many successes of the exhibition. It would be exciting to see an expanded version of the exhibition in the future with the involvement of organizations like SAVAC, the B.C. Archives, and the University of Fraser Valley's South Asian Studies Institute. Fast and the Kamloops Art Gallery have much to be proud of with this exhibition. Hopefully, the future will bring more exhibitions like these that help complicate the B.C. interior’s sense of itself and its often submerged diversities.