Interrogating our conflation of authenticity with certainty

Described as "one of the most studied and visionary writers in Canada today" by Griffin Poetry Prize-winner Billy-Ray Belcourt, Mercedes Eng has developed a body of work that is as personal as it is uncompromising. Her first collection, Mercenary English (2013), drew from her lived experience as a sex worker in Vancouver's Downtown Eastside. Her second collection, Prison Industrial Complex Explodes (2017), was inspired by her father’s prison correspondences. In my yt mama (2020), Eng focuses primarily on her relationship with her mother and whiteness. Influenced by Lindsay Nixon’s nîtisânak (2018), Eng uses the non-standard spelling of "yt" instead of "white" to decenter whiteness itself.

Simultaneously, Eng scrutinizes her own cultural cosmology with refreshing nuance. Reflecting on four decades of personal history, she turns over formative moments in her youth. Eng's inspirations come from her childhood and her contemporaries, her deities both personal and pop cultural: her yt mama and her Chinese immigrant dad, Lindsay Nixon and Amber Dawn, Toni Morrison and Terese Marie Mailhot, Cher and Kendrick Lamar and Mariah Carey. She picks through the myths invested in each figure, the legends that shaped her childhood, and through them interrogates the white, colonial fantasies imposed on her prairie hometown and its inhabitants. In this exploration of Eng’s multi-raciality, my yt mama refuses to let any of its agents or artefacts possess a single moral truth—to its brilliance.

While rifling through these inheritances, Eng’s poetry deftly demonstrates the ways we carry pop culture with us and alchemize it into personal identity. Pop cultural commentary exposes the racial boundaries between mother and daughter—often the source of the collection’s most compelling moments. Eng draws affinities with the chorus of Cher’s "Half-Breed" (1973) and Mariah Carey's 90s album covers. She traces her understanding of racial violence and her own racial difference to television shows and history books, where her mother's "contextless" explanations can only be internalized by Eng in the negative, each successive interaction underscoring how "in a not-so-far-away country and in a not-so-far-away time [Eng] might have been exterminated."

Still, at times, the collection strays from these poignant crystallizations. In “I got the yt supremacist blues,” a poem addressed to Kendrick Lamar, the speaker attempts to hold the rapper responsible for his appreciation of Taylor Swift, capturing a yearning for a kind of moral purity and heroism from Lamar that our artists can rarely provide, a desire for our pop culture to be perfect in ways we may acknowledge our families cannot be. The result is predictable, a simplified critique that would, perhaps, make for a popular tweet.

Fortunately, at nearly every other turn, my yt mama rises above these impulses, and offers a more complex treatment of race and representation, exploring the ways her mother can both be the force that disavows Eng’s perspective and the woman who “loved [her] not-yt dad / and didn’t give a fuck / what anyone in our shitty prairie town thought / about their love,” the woman who would “give rides to women whose men were inside” against the overwhelming violence of the prison industrial complex.

Nothing is excused, but nor are details ironed out in favour of something more digestible. Instead, Eng turns the smallest, most unexpected interactions into compelling poetry. Even sharing something as seemingly simple as a song can reveal kaleidoscopic longings, pointed miscommunications. Listening to “Half-Breed'' on the radio, her mother sees Cher’s glamour, Eng hears the pain of being a “half-breed.” Where her mother sees that “Mariah [Carey] is a mixee and that people love her” as a refutation of racism and isolation, Eng sees the hair obscuring Mariah’s face and the ways the popstar tried to hide from her mixed identity. Her mother sees Mariah’s success, the adoration of her fans. Eng sees Mariah’s pain. At its most engaging, the collection teases out these kinds of messy, conflicting desires.

We do not, my yt mama suggests, fit neatly into our expected narratives or origins. In her poem “who we are /what they see,” Eng humorously gestures to how the racial expectations imposed on her and her friends by onlookers never quite align with their realities. Rather than assert a politics of solidarity or allyship, “who we are /what they see” describes an experience of shared ambiguity, one that neither the speaker nor her relations opted into:

Sheryl, Michelle’s sister, is Métis
but could pass as half Japanese half yt

In the popularized language of CanLit’s “wreckage,” there is a common desire for our books and television, our authors and actors, to do clear political work, to telegraph politics and identities cleanly. But how neatly can we ever sort such entanglements? Just as her friends confound white onlookers, so too can Eng’s yt grandmother confound expectations of how a racialized author depicts her relationship to whiteness: “I haven’t contributed to the growing of food since I was a child and when I did it was with my yt grandma.” It’s a striking admission, and one that refuses CanLit’s enduring tendency for racialized authors to perform an “authentic” and morally didactic connection to the land or to their ethnic origins, and to claim that connection explicitly through a racialized heritage. Eng’s poetry suggests that authenticity cannot be so easily simplified, and makes room for us to grapple with our thorniest idiosyncrasies.

my yt mama is an invitation to generously reconsider both our personal and pop cultural expectations, to interrogate our conflation of authenticity with certainty—and the rewards of undertaking this challenging work. 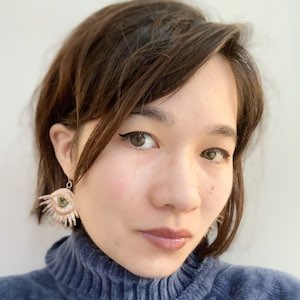 Rebecca Peng is a writer, currently living on the traditional, ancestral, and unceded territory of Musqueam, Squamish, and Tsleil-Waututh Nations. View bio.