Countervailing at the Margins

Simranpreet Anand unrolls two large, long, brown sheets of paper, one on top of the other beneath an exhibition titled, Portrait of the Artist: An Exhibition from the Royal Collection at the Vancouver Art Gallery. In dense black ink, she writes with a paintbrush on the first sheet: "i am not here". The ink dries dark and thick.

Dipping another paintbrush in water, Anand then begins to write, repetitively, over the English in smaller letters. She writes, in Punjabi, "ਮੈਂ ਇੱਥੇ ਹਾਂ"

The Punjabi written in water is less stark. It darkens and warps the paper. Anand paints from the far top-left corner of the page to the bottom-right corner until the entire sheet is saturated with the lines. It gradates in legibility, picking up ink from the English script, which begins to bleed as Anand paints over top of it. The water dries light and less legibly than the ink on the page.

The performance takes place on Friday, November 10, 2017. A ring of nearly 50 audience members encircle Anand's performance, and hundreds of gallery attendees weave in and out past her, casting curious glances, which extend over the course of the evening. She paints in the Gurmukhi script of the Punjabi language, the script that is now more commonly used for Punjabi on the Indian side of the now-divided region of Punjab. The Gurmukhi script of Punjabi is often identified with Sikh religious texts, and also holds a rich literary history alongside its counterpart the Shahmukhi Punjabi script, also known as the Perso-Arabic script, which is now used primarily on the Pakistan side of border of Punjab.

In oppositional repetition with a curlicue, Anand then begins to paint on the second sheet of paper. She writes, "i am here" in large letters in English and then proceeds to write in water "ਮੈਂ ਇੱਥੇ ਹਾਂ". Translation: "i am here"

Artist Simranpreet Anand is both not here and here. The disambiguation is brought forth in the space of English (i am not here/ i am here), in spite of its staying dominant due to the thick black ink. There is no question as to Anand's presence in Gurmukhi Punjabi in spite of it being a residual Punjabi space due to both its smaller scale and its being written with water rather than ink which causes it to sit lighter on the page. The words she writes on each sheet in Punjabi are the same. Her ‘hereness' (ਮੈਂ ਇੱਥੇ ਹਾਂ/ ਮੈਂ ਇੱਥੇ ਹਾਂ) or (i am here/ i am here) is inarguable in spite of its seeming translucence.

This doubling of Anand's ‘hereness' in the Gurmukhi script of Punjabi also tells another story around the question of access. It is one of the absence of Shahmukhi Punjabi, and the linguistic, cultural, and artistic fractures that continue to emerge following the 1947 Partition of India and Pakistan. The presence of the Punjabi in the piece, legible only through the ink pulled from English words, stimulates broader questions about the place of Punjabi and its relationship to English from the colonial period to our present moment. 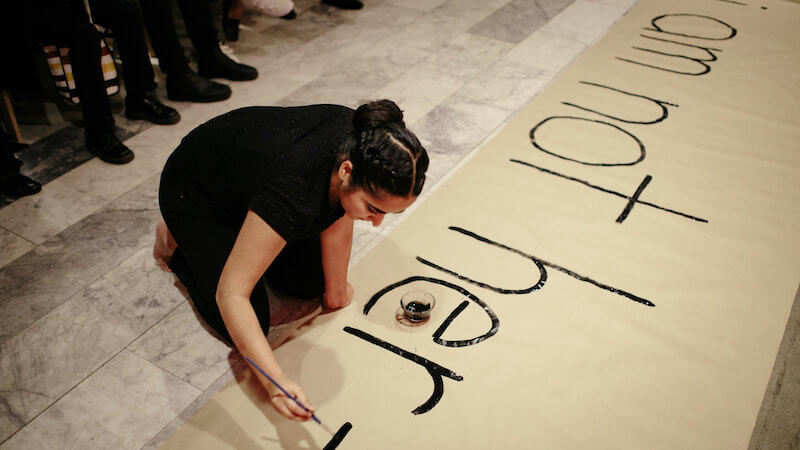 Upon completion of each sheet, Anand slowly and methodically pulls them further into the exhibition space with the audience trailing behind her. She places them beneath a work by one of the only artists of colour in the exhibition, Feodor Kalmuck's A Self Portrait, which has the description, "The Portrait of FEDOR, a Kalmuck Slave." A Kalmyk artist whose ancestors had migrated from the Xinjiang (Uyghur) province in China to the Russian Federation, the exhibition notes further state, "This delicately etched self-portrait shows that, in addition to his mastery of the medium, his exotic origins were being marketed to his potential patrons."1

Anand juxtaposes the placement of her own in/visibility, with the work of Feodor Kalmuck. She engages Kalmuck and brings his work out of the context of the exhibit and into context with her. Through the interplay of a fading script that rests illegible and her alignment with Kalmuck, Anand pushes against a centre that demarcates the lines of where her legibility and refusal lie. She prods us with the questions about desire, capital, displacement, migration and expulsion that move from nineteenth century Xinjiang diasporas in Russia to twenty-first century Punjabi diasporas in Canada.

Showcased at the VAG's renowned FUSE parties, Anand's performance was a part of four works titled Small Practices of Deep Looking, brilliantly curated by cheyanne turions, then Director of Education and Public Programs, and included four artists: Tsēma Igharas, Stephen Murray, Simranpreet Anand, and Stacey Ho. Artists were invited to offer their own perspective on individual works from the Gallery's exhibition.2

In my view, as emblemized by the exhibition discussed here, critique has become subsumed within gallery procedures, enveloped alongside the retention of more highly patronized canonical collections. Galleries hire educators to re-educate against their own spaces, re-instating centres of imperialism while re-engaging margins of otherness. These, while fraught, provide spaces for voice and an alternate call and response. Invited curatorial counter-script is becoming an increasing phenomenon as institutional galleries realize that their approach to what constitutes art and the artist (one that maintains whiteness, men, and empire at its core) has to be examined. The curatorial re-scripting is necessary and adds value.

The question becomes: is this enough?

There is the necessity to rethink agency and power in relation to art and capital in Vancouver, and to name the ways in which artists and artisans, cultural educators and curators, furrow their brows and burrow their ways in and through the surface. The groundhogs of Vancouver's arts and culture scene, they make spaces as they go within a system that benefits from them and reduces them all the same. As groundhogs create their tunnels, their ground also falls through. Let us hope that initiatives that centre diversity and works that countervail them will not let the centre hold. Let us be left with the traces of something different.

Kiran Sunar is a Liu Scholar and a PhD student in the Department of Asian Studies at the University of British Columbia. Kiran's PhD project attends to questions of gender, sexuality, and the fantastical in South Asian literatures with a focus on Punjabi literature in the early modern period. View bio.

Simranpreet Anand is an interdisciplinary artist and is committed to a community engaged practice. She is currently working as an Engagement Facilitator at the Surrey Art Gallery and Curatorial Assistant at Western Front. View bio.