The Trees are Innocent

When you put on the glasses the double image on the screen becomes one body and the screen a space with depth and dimension. Your eyes move to follow the careful gestures of an Asian woman as her hands follow the line of a tree's shadow, climbing horizontally along the space where the tree's bulk obscures the sun. Her movements are slow and considered, delicate steps, hands that explore the boundary between dark and light as if the photons were made of fine cloth.

The 3D video is titled "How to Climb a Tree". In front of the camera is Vancouver born performance artist Ayumi Goto. Behind the stereoscopic lens is Governor General award-winning photographer Sandra Semchuck. The work is part of the first passage to Supernatural: Art, Technology and the Forest, an exhibition at the Art Gallery of Greater Victoria that explores how our idea of the forest has been constructed through technology and the camera's lens. Semchuck's and Goto's contributions set the stage for the rest of the exhibition, moving us to reconsider human/non-human relationships and how technology influences our perceptions, themes also present in Semchuck's photographs that fill the remainder of the room.

"How to climb a tree" documents Goto's move to find a responsible, respectful and reciprocal relationship with the trees and non-human world around her through play. In contrast to scaling the trunk vertically, conquering it in the climb, Goto's method of subtle observation and gestures that play with the light and shadow cast by the tree allows the environment to dictate the terms of the engagement. "So, then I think why don't you play with the shadow, so that way the tree and the sunlight and the environment has control over your play."1 The lightness of Goto's touch and emphasis on play is also a way to heal the mass, intergenerational trauma induced by the bombing of Hiroshima & Nagasaki. "The blasts were so strong that that you could only see the shadow of the people left imprinted on the ground." Play for her is as essential to survival as food and water and she invites us to imagine a world where there is nothing left to play with but shadows. 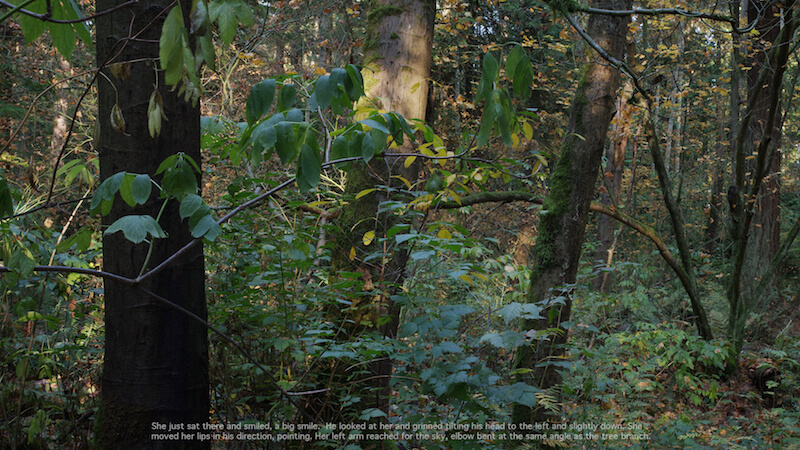 "She just sat there and smiled, a big smile. He looked at her and grinned tilting his head to the left and slightly down. She moved her lips in his direction, pointing. Her left arm reached to the sky, elbow bent at the same angle as the tree branch."

The play in the video is both an attempt to work through the deep traumas induced by war and violence and an act of conciliation between her body and this territory, itself scared by colonial incursions and genocide. Later in the video she interacts with the roots and trunk of a decaying upturned tree. This time her hands caress the mossy surfaces with the gentle hands of a caregiver, an offering of gratitude to a lifetime of holding ground and cleansing air and the nurture tree continues to offer new life even as it decays.

Respectful relationships are at the centre of this work for both Semchuck and Goto; a respect grounded in the specificity of one's own position and an openness to the possibilities inherent when we engage with the "wider than human" world. Semchuck's movements behind the camera respond to her careful observation of Goto and echo Goto's gestural responses to the fall of light and shadow from the tree. Overtone singing by Semchuck provides the soundtrack to the video, a drone of interlacing harmonies edited to reflect the subtle energetic shifts embodied by Goto's movements. They are both trying to capture something that cannot truly be seen, a presence, life in relationship, beyond the human. It is an imaginary quest, rooted in play, but as Semchuck notes "perceptions are always an act of the imagination."2

Semchuck seems to be working to open up perception, to allow things to be viewed from multiple perspectives. Although her photographs may be seen as portraits of nature they avoid a human/nature binary by placing us in relation to the wider than human world and constantly alluding to that relationship as being one of multiplicity and complexity. By looking at the wider field in which we exist she opens up new responsibilities, possibilities and freedoms. The process is somewhat analogous to her embrace of the 3D camera. Semchuck describes how her perception had previously been trained through the single point perspective of a cameras lens, by words on a page and flat reproductions of images.3 The 3D camera disrupted that perception forcing an awareness of depth and changing perspectives. She has brought back this complicating of her vision into her two-dimensional work where positive and negative space occupy overlapping layers rather than being positioned on a single plane.

The examination of human relationships to the "wider than human" continue in Semchuck' four large format photographs that make up the rest of this portion of the exhibition. Each shows a wooded area with a few sentences of text along the bottom of the image. Each text establishes a different set of positions and relationships between photographer and tree, human and non-human, imagination and memory. In "The Elbow Bent" a couple converses through gestures that mirror the surrounding trees. The combination of image and text places the forest as an imagined site of human intimacy. In "The Trees are Innocent" the trees hold the memory of a woman's murder and the words speak of Semchuck's difficulty entering the space where the violence has occurred. Whereas in "The Elbow Bent" the forest contains and enables human intimacy, "The Trees Are Innocent" speaks simultaneously of their remove from human conflict and role as witness to our actions. The other texts/photographs speak of nature's resilience and a tree's role "holding the world together" as well as the sentience of trees and their ability to carry spiritual presence, memory and authority.

"I remember the day that a notice was posted at the entrance to the park warning us of her murder. It was hard to return but I did. The trees are innocent. I think of her as I walk, how she worked to help women. And I am vigilant."

Interestingly the three-dimensional video that enabled the shift in perspective for Semchuck is more problematic from the viewer's point of view. Here the technological apparatus, the 3D glasses and screen, sets the frame for what is to be looked at and how, forcing the viewers eye to occupy the space of the photographer. Whereas Semchuck's work sees relationality rooted in an understanding of specificity and the separation between different positions, the viewers immersion in her stereoscopic visual field becomes an intrusion. This intrusion is made more apparent with the camera's movements and closeness between Goto and Semchuck. Goto notes, "So, with Sandra, there were some parts where she was kind of close by, but it's Sandra and she's my friend so I think for me a camera in her hands is not something that is trying to take something away from me. In her hands the camera is an extension of the way she witnesses people." The immersive video pulls the viewer into a technologically mediated intimacy that is not theirs. The movement of the camera as it dances around Goto also works to separate the viewers visual perception from their embodied reality, an effect heightened by the stereoscopic immersion. The gallery is a long way away from the forest floor.

For me anyway, there is a push/pull between the allure of sharing Semchuck's visual experience and intimacy with Goto and the discomfort of this position made possible through Active 3D TV technology. Ultimately, I land firmly back in the context of the AGGV exhibition. Here the work drives home how different technologies mediate our understanding of our environment and enable different relationships. While a newer technology such as 3D TV draws our attention to how it positions us, still images, text and video make their own push on our perceptions. Later in the exhibition is a camera made to view objects that wash up on our shores (Trudi Smith, Drift Camera – prototype 2018), archival video of early industrial logging (Carol Sawyer, Wood Work, 2011), and a multichannel video of where trees appear as flickering holograms on an alien landscape (Kelly Richardson, The Erudition 2010). Mike Andrew McLean photographs human incursions into the landscape and the reclamation of these domesticated spaces by nature. Dan Siney documents the uncanny faces of tree stumps left by early colonial logging. Each offer different ways of seeing our relationship to our environment and the space it holds in our imagination. It's the wider than human world we need to care for as we play in its shadows.

Charles Campbell is a Jamaican-born multidisciplinary artist, writer and curator. He has curated exhibitions in the UK, Canada and Jamaica including Anything With Nothing: Art From the Streets of Urban Jamaica at the National Gallery of Jamaica where he was Chief Curator. He currently lives and works in Victoria BC. View full bio

Ayumi Goto is a performance apprentice, currently based in Toronto. Born in Canada, she sometimes draws upon her Japanese heritage and language to investigate notions of national culturalism, senses of belonging, and activism in her creative practice. View full bio

Sandra Semchuk is a photographer and Governor General Award recipient in Visual and Media Arts. She is a storyteller who uses the familial, autobiography and dialogue as the basis for recognition and identity across generations, cultures and species. She is currently telling stories and doing collaborative portraits in dialogue with the sentience of trees. View full bio