I was a law student in Vancouver when first the Ocean Lady and then the MV Sun Sea arrived in British Columbia, two worn-out freighters carrying 568 people between them. One passenger had died over the course of the journeys from Sri Lanka, another had given birth. All of them, including the newborn, were detained upon their arrival, separated into prisons and jails across BC's Lower Mainland.

When the first boat arrived in 2009, I was recently returned from visiting family in Sri Lanka, navigating checkpoints and watching local news during the height of the war-time killings. Beaches now crowded with tourists and army-funded resorts were then bloodbaths, a shoreline ruination of bodies, shelled hospitals, and hollowed-out orphanages. Mullivaikal, May 2009: the name of that last bombarded little town, and the name by which we commemorate the war's unending end.

When the second boat arrived in 2010, my roommate and I secured clearance to visit the mothers and children being detained at the Burnaby Youth Custody Services Centre. It was a rare opportunity to speak or hear Tamil in Vancouver, where the Tamil community is quite small.

I remember a 15-year-old boy, who was much older than the other children. When I asked him how he was doing, he explained that his older teen brother and his father were being held with the other men and teenage boys in the Fraser Regional Correctional Centre, a maximum security facility. He was gentle with the little ones, but he mostly sat by himself. He was utterly without a peer group through those long months of detention in Vancouver's suburbs. Before I left that day, he hid one of my shoes behind a couch. He wanted me to stay, piped up one of the younger children, emerging with my worn red flat as I stood flustered at the metal-gated door.

I thought of those children often as I read Sharon Bala's The Boat People. They may find themselves reflected in this novel about post-war Tamil refugee migration to Canada. The book's clearest character is Mahindan, who, like the children, made the dangerous trip from Jaffna to Canada, with uncertain results. Challenging media and government rhetoric of the time, the book provides a humanizing portrayal of the asylum-seekers and a complex look into what constitutes "human smuggling." It also provides a rightly damning portrayal of some of the conditions of migrant detention, as well as the labyrinthine nature of Canadian immigration laws.

Still, I balk to think of explaining to that young boy why a book written for/about him bears as its title an insult directed at him. Who is this title meant welcome into readership, and who exclude? There have been no community efforts to reclaim insults like "fob" (i.e. fresh off the boat). The title's sensationalism may secure outsider interest, but it demeans those who bear the brunt of its violence.

Beautiful welcome banner and march. Photo credit: No One is Illegal Vancouver.

In the book's "Author's Note," Bala provides a quasi-research bibliography. It includes a 2011 essay I wrote about the Canadian government's criminalization of the Tamil asylum-seekers. The inclusion of a bibliography in a novel suggests Bala's desire to, in some way, be accountable to the story's real-world origins and consequences.

However, Bala does not say whether she attempted to speak with any of the Tamil migrants on whom she based her novel, or, if she did, how they responded. She describes the book's characters as "entirely fictitious." Several of the migrants did media interviews, indicating a desire to tell their stories themselves. I struggle to reconcile this ethical rupture with Bala's explanation that she wrote the book precisely because "anonymity and silence also stripped these people of their identities."

There is a difference between writing for a people and writing about them. Or, as the late Tamil novelist and intellectual A. Sivanandan has noted: "the people we write for are the people we fight for."

Beginning with the moment of their arrival, the book nods to neo-Nazi Paul Fromm's real-life handiwork, describing a racist demonstration that greets the migrants at their disembarkation at Esquimalt on Vancouver Island. In the real world, the migrants arrived in August 2010. In the novel, they arrive in Canada on Canada Day. When Mahindan has his first shower in months, he describes the dirty water sloughing off his body as "Sri Lankan horrors washing away in Canadian waters, disappearing down Canadian drains."

Édouard Glissant reminds us: "a boat is a departure and an arrival." Mahindan's arrival was not simply into the Canadian state, but onto the territories of the Lekwungen/Songhees. Sadly, Bala does not mention the Indigenous women who, outside the strictures of the Canadian state, held a welcome ceremony for the Tamil families staggering down the gangplank that day.

Long after those Tamil asylum-seekers were released, Canada has continued deporting other immigrants. The novel lauds the Liberal government, but the Liberals are currently attempting the removal of, for instance, Abdoul Abdi. As Haudenosaunee writer Alicia Elliott, citing Unangax̂ professor Eve Tuck, observes: "Abdi arrived and lived on traditional Mi'kmaq lands. What do the Mi'kmaq people have to say about Canada deporting him? […] this is a sovereignty issue."

Indigenous welcome for refugees. Photo credit: No One is Illegal Vancouver.

On the ground, I remember months of weekly noise-demos outside the Burnaby detention centre, organized by No One Is Illegal-Vancouver (of which I was then a member) and the South Asian Network for Secularism and Democracy. We blared Tamil nursery rhymes and pop hits as loud as our speakers could go, watching the children inside waving hard against the window bars. We waved hard back, until guards forced the kids away. I remember how the people who brought homemade noisemakers to wave at those children were often the same people who attended Vancouver's annual Feb 14th Women's Memorial March, organized by women from the DTES to honour the lives of missing and murdered women from the DTES. The province's inquiry into Robert Pickton and the disappearances of disproportionately Indigenous women from Vancouver's Downtown Eastside (DTES) began less than a month after the MV Sun Sea arrived. First held in 1992, the March now attracts thousands of people every year. Unmistakeable and vital, the March is one of Vancouver's most redeeming features.

I also remember doing jail support in the small hours of the night for anti-Olympics protesters who separately trekked hours to play music in a language they didn't understand for Tamil families they would never meet. The 2010 Winter Olympics served a precursor to Toronto's own experience with militarization during the G20 a few months later. It transformed the landscape of policing, surveillance, and poverty in Vancouver. In contrast, Bala depicts the Olympics as an idyllic time.

For a book that is based on recent events and that clearly involved a great deal of research – at least on the legal front – the nature and the extent of this revisionism is concerning. I look back, now a lawyer and a law professor, on those months of cross-community mobilizing, and I marvel. That intercommunity, extralegal mobilizing was some the best legal schooling I ever received. I was very lonely for my Tamil friends in Toronto, but in the diversity of our convergences, we were a rising tide in Vancouver. It is difficult to recall the nuance and passion of those beautiful and hard years, and then have to resign myself to this novel's elisions.

Yet it must be noted that The Boat People is the first book to have been written about the MV Sun Sea. To that end, it charts new routes. Before it, English-language North American writing about Sri Lanka was long uneasily housed in the catch-all category of diasporic South Asian writing. This faux genre's inevitable lack of internal cohesion has meant the novels contained therein have often defaulted to the preoccupations of middle-class Indian-US immigration. Bala's book marks a notable departure from those depoliticized fables of assimilation. It has impressively ambitious parameters: it is not only a story about the recent detention of Tamil refugees in Canada, but also an intertwined story about Canada's historic detention of Japanese citizens. Thus, despite its flaws, I am grateful for the space it has opened up. I look forward to the writing that will follow. 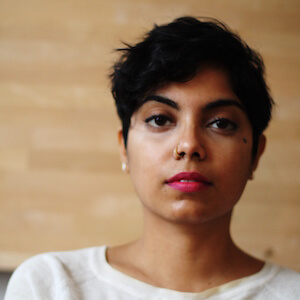 Fathima Cader’s recent and upcoming publications include creative non-fiction in Hazlitt and Warscapes, poetry in Apogee and Canadian Woman Studies, and criticism in The New Inquiry and The Funambulist. She practices human rights law in Toronto and teaches at the Faculty of Law at the University of Windsor. She is interested in borders and in the migrations of war. View bio.