RUNGH is pleased to be a Community Partner with the Doxa Documentary Film Festival (May 3-13, 2018) to present “Shifting Worlds: Shorts Program”, a screening of six short films from Canada, USA, Spain and Germany.

This selection of short films explores the multilayered effects of displacement through a variety of refugee, immigrant, and Indigenous-centred stories. -MS

Crisanto Street • Paloma Martinez, US, 2018, 10 mins
A young boy captures a moment of change for his immigrant family in California.

At Home with the Horses • D. Alansari & E. Sanderson, Canada, 2017, 16 mins
Fourteen-year-old Reem struggles to adapt to a new reality after fleeing Syria.

The Fourth Kingdom • Adán Aliaga & Àlex Lora, Spain/US, 2017, 14 mins
Against the backdrop of the American Dream and a kingdom of plastic, a bottle return depot serves as a refuge for a community on the fringes of society. 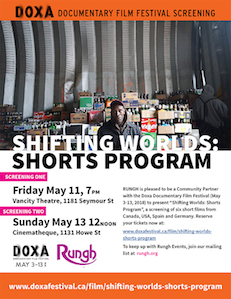